Since its inception, the research university has been the central institution of knowledge in the West. Today, however, its intellectual authority is being challenged on many fronts, above all by radical technological change.  Organizing Enlightenment tells the story of how the university emerged in the early nineteenth century at a similarly fraught moment of cultural anxiety about revolutionary technologies and their disruptive effects on established institutions of knowledge

Late eighteenth-century Germans, troubled by a massive increase in the publication and availability of printed material, felt threatened by a veritable “plague” of books that circulated “contagiously” among the reading public. But deep concerns about what counted as authoritative knowledge, not to mention the fear of information overload, also made them uneasy, as they watched universities come under increasing pressure to offer more practical training and to justify their existence in the age of print.

German intellectuals were the first to settle on the research university, and its organizing system of intellectual specialization, as the solution to these related problems. Drawing on the history of science, the university, and print, as well as media theory and philosophy, Chad Wellmon explains how the research university and the ethic of disciplinarity it created emerged as the final and most lasting technology of the Enlightenment.  Organizing Enlightenment reveals higher education’s story as one not only of the production of knowledge but also of the formation of a particular type of person: the disciplinary self. In order to survive, the university would have to institutionalize a new order of knowledge, one that was self-organizing, internally coherent, and embodied in the very character of the modern, critical scholar.

“A timely and provocative book written with contemporary debates in mind,  Organizing Enlightenment gives us an impressive history not of academic disciplines but of disciplinarity itself—the infrastructure of specialization that has come to characterize the modern research university. What is the point of specialization? What is the role of the book within learning? Are lectures outmoded or sources of enlivened knowledge?  Organizing Enlightenment helps us understand how specialization is not a new problem to be solved but the answer to an older problem of media surplus which we still inhabit. The more we hear calls for the reform of research universities today, the more we will need such insightful and clearly written histories as this one.”

(Andrew Piper, McGill University, author of  Book Was There: Reading in Electronic Times)

“The crisis of the university in the age of MOOCs and the new media? As Chad Wellmon shows in this learned and lucid study, we’ve been there before, several times. Tracing the development of the university from the shock of the print revolution in the seventeenth century, to the rise of the utilitarian knowledge factory in eighteenth-century Goettingen and Halle, and to the emergence of the research university in nineteenth-century Berlin, Wellmon gives us a thought-provoking account of an astonishingly resilient institution. He also offers rich material for reflection on the meaning of the life of the mind, whether pursued in the classroom, the library, the laboratory — or online.” 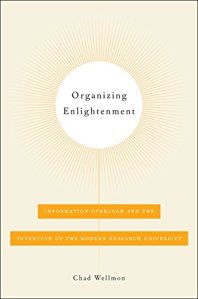 Chad Wellmon’s erudite and brilliantly conceived study shows the key role of research universities in developing modern information culture. From the seventeenth to the twentieth centuries, universities have played a central role in how information has been acquired, collected, preserved and shared. Wellmon shows just how essential research universities have been in the creating a modern culture of information management, from Google to Wikipedia. Even more, Wellmon shows that the freedom and intellectual independence of modern universities is key in the development of future information technology and the maintenance of political freedom.  Organizing Enlightenment shows just how much our own technologies and freedoms grew directly from German university traditions. It is eye-opening history and necessary reading for anyone who thinks the humanities play a secondary role to technology.